You are here: Home / Beekeeping / Middle of June

I have finalized my decision to keep bees, chosen beehives and about the middle of June 2012 went to pick them up. They are what is known as OPTIMAL beehive, it is almost a national Czech hive standard.They can come in different sizes,  I chose all my boxes to be 42x17cm. I have two complete sets of 4 boxes, 2 feeders, 2 floors, ….the realization at the time of driving home with a car full of wooden boxes – beehives was mind blowing.

They were painted with base colour and top coat, lime green on top and the floor with dark  brown. I know two really nice guys,  beekeepers who knew I had beehives and were happy to help. Due to personal reasons we had to leave Slovakia for about two weeks, the hives were stored in the potting shed and I  settled with the idea that I will get bees next year.

After reading beekeepers blogs I have always found a page  “The bees have arrived!” Must be pretty exciting but I am not complaining as upon our arrival I found one beehive outside and almost jumped with joy, as it was clear it had bees in it. A surprise from my keeper friend and my mum and dad – he had a huge swarm that he didn’t want to keep any longer so they came here, organized everything and put them into the hive. They are located near the house, I go and see them every day numerous amounts, we go and sit on a board in front and drink our coffee, they are amazing to watch.

We have been back 2 weeks now, they have two supers, due to the size of the swarm, no queen excluder, I have inspected them twice, they seem like a nice bunch, still haven’t seen the Queen. The weather so far has been challenging, we had + 30C for the first 10 days of June, hottest day was + 38C, right now we have + 16C  wet and windy.

I have fed them twice already, first time 1:1, as our meadows etc are starting to slow down. The second time because of the  weather change and the knowledge that my bees didn’t have much food in their stores I decided to feed them 3:2. Already had a bit of trouble with wasps, made a wasp trap, which is working.

With this I have summed up what has happened till now, from now on I will try and write as and when things happen. 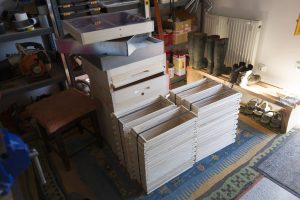 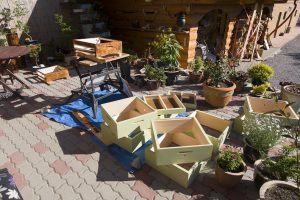