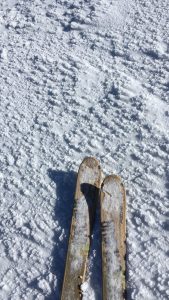 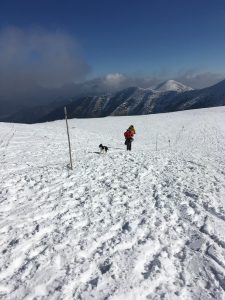 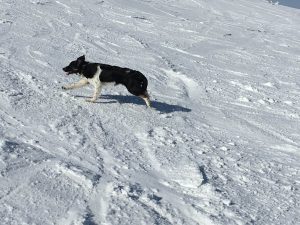 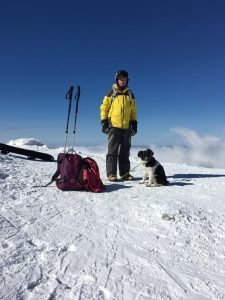 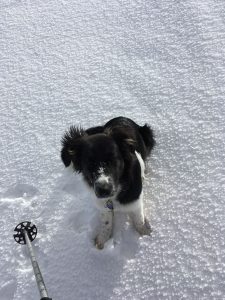 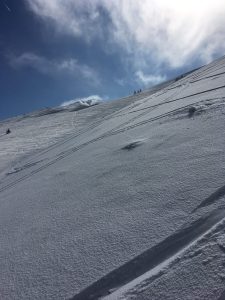 we drove up the cabin to Chleb, from then on we went to Krivan, picture on top with Mike, that is our highest peak at 1607 m, after that, Mike boarded down on its shoulder and we went towards Maly Krivan, I wanted to go into an area which would not be too steep so not to get her to chase, I believe we achieved it, we went to a mountain called Bublen where we turned around and traversed bellow it, the second and last picture, made it to the top of Snilovske Sedlo where we located Mike on Chleb, took a picture with my phone but Mike was just a little dot, went for a little bit towards him then slid down and continuted back again to Snilovske Sedlo, agreed to meet at the top station so just zigzaged towards it. Had a break, exchanged stories and went home. We had a brilliant day, it was lovely and warm if you found a spot where the wind did not blow. Meddy had a good time, trying to teach her about keeping back and not doing anything stupid around skis or board, so far so good, chased my ring on the sticks but otherwise pretty good really, we spent the afternoon in the garden, put the bonsai trees on the patio as the temperature in the greenhouse was a bit to high for them, Meddy did not rest during the day, but once she had her dinner she is totally crashed out.

The sheep, really good, Ewe-Ewe is doing really well, the lambs are pretty good as well looking well. Willow sort of settling in on her own, has a big problem when we go into her pen but calmes pretty quickly, Meddy went to see her today, she was ok till the last minute when she pushed her out. 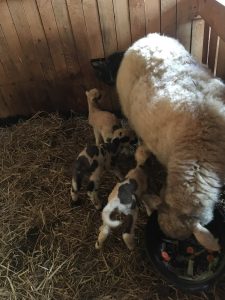 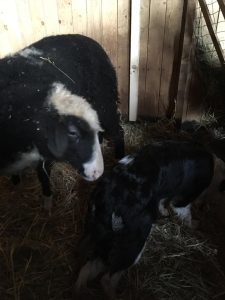