You are here: Home / Beekeeping / Things and places we got up to

We have officialy finished hay making, our barn is full, we still have boards on the top of our hay just to allow a little bit of space between the roof and the hay, but they will be able to come off and it will give the hay a bit of space to breathe. We have got our garlic in the sheep shed now drying, it is looking really good. The garden itself is not too bad, my carrots never really came up and the few that did were finished off by either slugs or carrot fly, onions are very good, we tried red onions again this year, haven’t had that much success with them before but this year they are looking pretty good, we have started picking peas and broad beans. Mike told me that our broad beans are huge so I had to take a picture of him standing next to them. I left the Purple spr.Broccoli in the garden as the bees came onto the flowers and I could not bring myself to pull them out, double use, tripple actually as even the chickens and the sheep benefited from them as we gave them the pulled out plants. 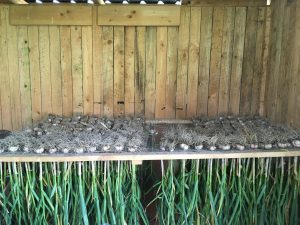 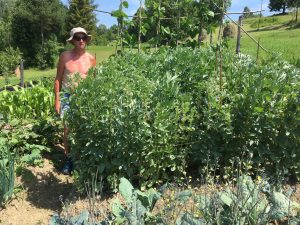 We have also managed to sneak in a cycle ride just above the house. A test for us and for Meddy as neither of us have done much cycling this year and Meddy has not been involved either, but it actually worked out really well, she does not go mad on the road, need to get her used to different noises and animals by houses, dogs behind gates etc but as we just started it was pretty good. 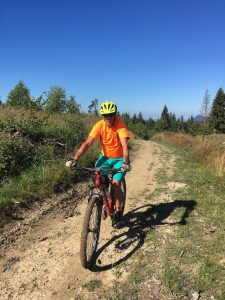 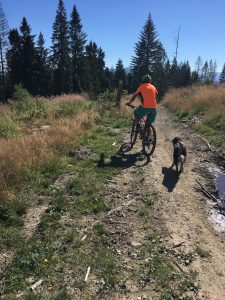 We went walking in Vratna for about 2 hours. We went to Boboty, rocky terrain, in the woods, coming back by the side of the river. Very nice to do some walking up there again. 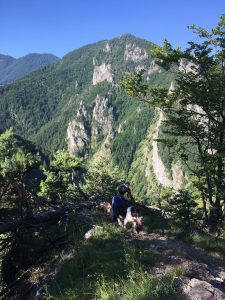 Meddy had a bit of a sore foot and I thought it was the rocky path that did it, the next day I had a bit of a poke around and she really wanted to be elsewhere a bit of pus came out so no rocky path but a thorn. We managed to get it out, after a bit of squealing. First of many. (thornes and squeales I guess)
I don’t think I will ever get over Meddy’s love of water and mud, although she prefers to be able to walk in and waddle in, sometimes the muddier the better. 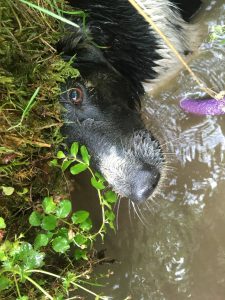 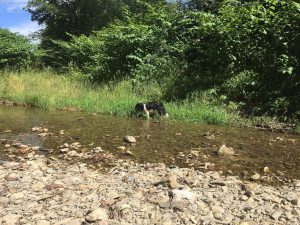 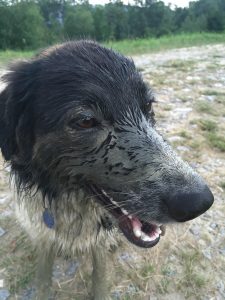 I found a finch on the stairs after it flew into the window I guess it looked well shaken so I held it for while and then placed it in this tree root we have in the garden, Mike found it wandering on the lawn later, and with two cats he decided to lift it into an acer tree on the lawn, it stayed there well into the night and I suppose joined its friends in the morning, did not find any feathers so I believe it flies to live another day, and the last is a pictures of our Hyssop plants in the Eye bed, they were so full of bees it was absolutely amazing. 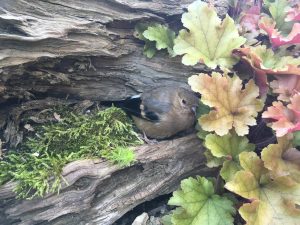 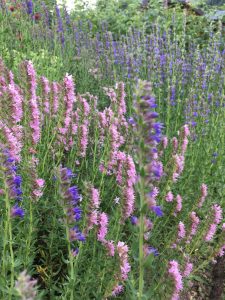 The bees are doing pretty well, I am glad we built the apiary as the weather has been really hot, 33 C for the last week or so, today we have rain and about 20 C. The roof has given them a bit of a break from the sun through the day. They are still as nice and as calm as at the beginning. Very happy.