You are here: Home / Beekeeping / Finally the Sun blessed us with its presence, …..

Thursday morning,  we finished our chores and returned home. Mike was talking to me about our plans for the rest of the day and then it happened. Totally unexpected, my mum and our neighbour shouted to me that my bees have swarmed. I panicked, in my mind my bees should not swarm, I created the artificial swarm. But as I have read so many times, one never knows. The swarmed bees were in the plum tree on the edge of the vegetable garden. Our neighbour said she saw a swarm by the beehives. I only took the lid off the beehive which they could have swarmed from but everything looked normal. Mine or not there is a swarm in our garden so I got myself sorted out,  got another beehive ready for the swarm, read up about it. 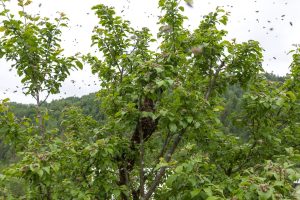 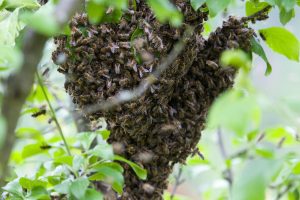 First I left them to settle as they were still buzzing around the tree, so many bees on the leaves, and on the branches.  As it was they were spread quite well on 2 branches, divided into little lumps, not my perfect first swarm. A little shower was a brilliant help which came in the form of rain, soon after it stopped I got my gear sorted out, brushed them as well as I thought into a box, had a sheet on the ground, put the box on the floor, but as soon as I was brushing them off they were going back onto the branches. Second attempt, looked much more promising, they were not as spread out, in an almost tear drop and this time I got a smoker, so I smoked and  brushed them off,  shook the branch to dislodge any that might be hanging on. I was quite pleased with myself. Put the box on the ground, turned it gently and left them to calm down. Or so I thought, foolish, shortly afterwards they all flew upwards and back onto the tree, I did not get the Queen. So I left them again to settle, and for me to think about plan C plus get a coffee. Later on –  plan C, with a water sprayer I climbed up the steps, they weren’t in as bad a position as the first time but neither were they in as good position as the second time. One can only but try. I took my time, worked accurately and brushed, sprayed and shook continuously – success. How I knew? They did not try to go back onto the tree en masse, once I placed the box on the floor, I did not turn it, just covered it a little with the sheet, the bees climbed into the box and quietened down. HURRAY. 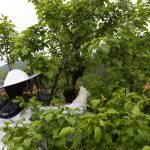 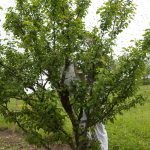 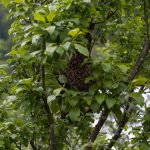 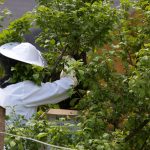 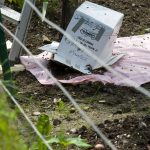 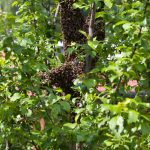 I left this for a while, waited for them all to join the Queen, got the area sorted out aroud their new hive, put a board in front of the hive. Later I placed the sheet that was under the box on the board and emptied the contents onto it. First they just climbed over each other, some walked into the hive but not much, some flew back onto the tree. I decided to look for the Queen, found her put her into a match box and emptied it into the hive. The sudden change was quick, almost instant,the rest of the colony started marching inside the hive. The day after we hardly saw them, 2 days after being hived they were out and about getting food, stores etc, they were occupying 5 frames from N to W. 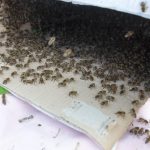 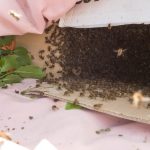 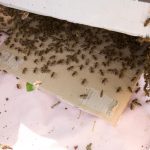 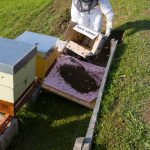 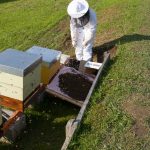 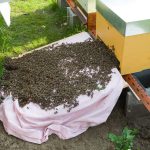 On Sunday I checked the other two hives, found both Queens, some stores and no brood in either, I am wondering whether they have changed the Queen in the first one due to no brood but not sure. 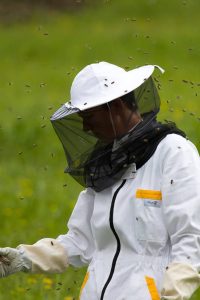 Mike was very brave and took photographs even though he got stung 4 times during my foray with the swarm. They are very good and its good to see the whole process from beginning to end . Hope you enjoy them as well.