You are here: Home / Beekeeping / Time flies when you enjoy yourself,

Since the last post I have added a box each onto the new hives. Although they are not full of honey the frames of foundation have now been built on so ready to put any stores into it if that is what the bees decide to do.

Hive inspection on 20th of July. Hive A, the original hive is doing really well, I probably should have put another box on it earlier, now I am worried it is too late, I have taken some pictures from the hive, the top box has got 1/2 of frames capped honey and the other still open, my beekeeper friends have already extracted honey and are still extracting honey from their hives I haven’t extracted at all, but I have tasted my honey, licking off honey from the bits of wax that I had taken off that was built under the frame and broke off when I pulled the box away, it tasted delicious. 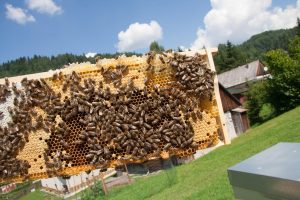 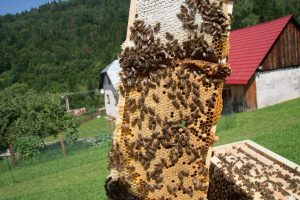 In the middle of this frame the bees have repaired the foundation with a double wall. I have left it for now. You can see half brood half stores.

Middle hive – I found the Queen, when I was not looking for her,  We seem to have a pretty good broo 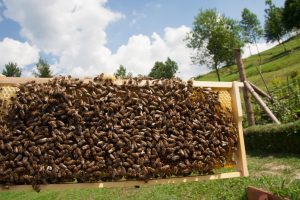 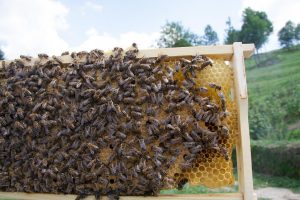 the frames. Queen not included in these pictures.

I did manage to see her in the last hive.  They are doing very well. Brood from eggs to larvae, always busy and as much as I used to worry about their temper as they used to be a bit sharp at the beginning now it is the opposite. 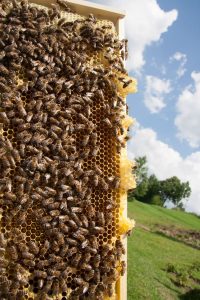 The bees were extremely nice to me that day. Very tolerant and very forgiving. I took my time, the weather was sunny and cloudy, very little wind but otherwise they were just lovely, calm, minding their own business, and left me to do what I wanted to do. 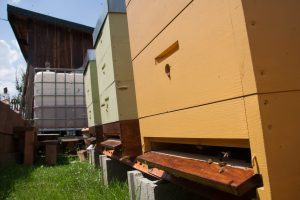