Well, I would not have believed it if somebody told me 12 days ago that I would have 5 hives with bees in them in our garden. No way, but it is true we hived the 5th hive on Saturday and the reasons for it happening – the need to reproduce that is the way I understand it. Actually if you consider it this bee colony has been very reproductive indeed.

Firstly we made two splits, because it had lots of QC in it. Then Rudo saw a little cluster of bees that swarmed that he left, I am guessing that went with the old Queen, after that came the swarm that he caught and we went to hive it, that is Hive C, after that my hive from the split swarmed, we hived it, and on Saturday the other hive from the split swarmed and we hived it. Unbelievable. It swarmed onto the same bit of wood as the previous swarm.  The bees that swarmed must be amazing weather forecasters, we have had nothing but rain over the last 3-4 days, they picked the only 1 hour and a half that was without rain to swarm. It was lucky we were here, I watched the bees dripping out of the hive, it was amazing to watch. Must be mind blowing if you see a big colony swarm, and the hum, .. amazing. Fingers crossed they all do well, I am planning to feed them till I see capped cells, that means they consider it as surplus. Or so I have read.

I had two Brood boxes on the swarm hive and thought I would bring it down to one, did not think they needed it, so I waited till about 11 o’clock today to open them up and sort it out, well the top box had bees everywhere except 3-4 frames, there were all on one side, so I took two out, slid the rest of the frames along and put the two I took out on the edge so it is all a bit even, I did not split up the cluster. I did re order the boxes took this one off put it onto the floor and put the other one on top. They had eggs in the frames so the Queen has managed her mating flight and was successful at it, hopefully. So far so good, the colony seems to be growing rapidly and they are busy bringing in pollen, I am hoping after they take the last lot of food I will be taking the feeder off and giving it to the last swarm. The weather is not helping, but suppose to finish playing about this week, cooler temperatures, raining most of the time, cloudy. Hopefully it will get it out of its system this week and than we can look forward to a bit of sunshine.

some pictures of the latest apiary, sorry about the quality, it was at the end of the day. 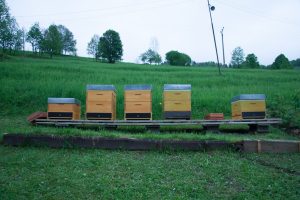 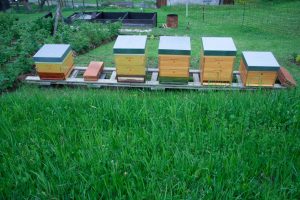