You are here: Home / Beekeeping / Bees inspection the first of 2016,

It was about 2pm, I decided to do it later on in the day as it was warming up a bit too rapidly and the scent of honey was drifting somewhat so as not to bring in robbers and open the hives up in the heat of the morning we got on with other tasks prior to me checking out the bees.

Started of the smoker, got the feeders ready as it is suppose to rain and I want to give them some BeeVital Bee STrong just prior to it doing so, it is forecast to rain on and off for a few days so I thought I will be smart and give them the feed during this stage, it will stop or slow down robbers from coming near my hives.

I have left the robber screen on hive B, that was the first hive I checked and what a lovely surprise I had, even thought they are only occupying about 3 frames there are eggs, but I saw the Queen which brought a smile to my face. here is a picture of her Majesty. 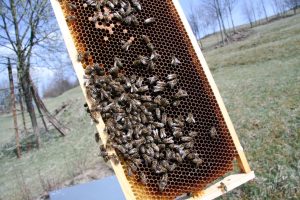 Then Mike came around a took a picture of me

after that I went to hive E two supers, first full of stores some capped, lots of bees, checked out the bottom super, stores again did not see any eggs, but bees nice and calm, stores with pollen as well as nectar/honey. Need to check in a weeks time for space!
Hive C again two supers had more space free, had lots of stores and found a frame or two with nice eggs, capped larvae, all the rest looked like stores – found this in the second super. 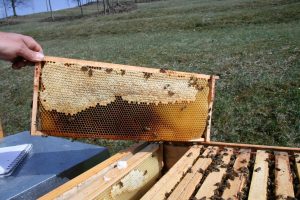 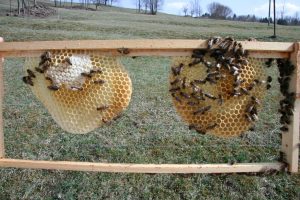 Hive A was maindblowing really nice surprise, had just about equal amount of stores and brood, maybe had 3 half filled frames so I decided I would add a super to it, gave them 4 Foundationless frames in there as well. 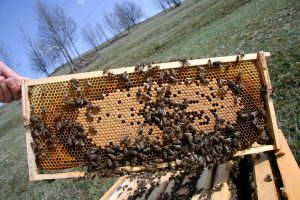 Hive D, this one has about 3 frames of eggs and capped brood and 3 frames of stores, must put a robbing mesh when it comes to feeding them.

All the bees were calm, patient, had a couple of stings, worked without gloves.
The question is will I give the  hives a double dose of Bee Strong or will I only give a double dose of Bee Strong to B,D and A as I added a box to this one, and only a single dose to C,E, that will still leave me with two single shots or one double shot for them. Will have to give it some thought. I need to make 1250 ml of feed,  will probably just make a 1:1 mix and add enough water to make up to the needed amount.

All in all the inspection went well, I got a friend to make me a couple of feeders, so that makes my life easier as I can feed each hive at the same time. Apifonda was pretty good as well, the bits that I found in the hives, I either stuffed between frames or took them away as they were dry and crispy.