After about 2-3 weeks of really hot weather, above 30 – 38 degrees Celsius nearly every day, and about 20 degrees during the night have come to an abrupt end with sudden drop of temperature and even rain, which actually was really nice.

During the hot weather I used to go and water the ground in front of the hives once or twice a day and I left the grass in front to grow so it would keep the moisture as the dew was pretty good during the night. Mind you I used to water the grass in front up to the point when the bees started to attack me and I decided if they don’t want me to why should I get stung. They seemed pretty ok, had it reasonably well sussed would be busy from early on till it got quite warm, did not see them bearding once during the hot spell so must have kept the temperature down sufficiently. I did not disturb them other then keep an eye from a distance, they weren’t very friendly, things considering I can understand it.

There was a sudden arrival of wasps. They seem to do a good job of fighting them off, from going into the hive.  I have not noticed other bees giving them a hard time either.

I managed to inspect the hives today, there were two hives which did not have a drop of honey or nectar in them, but brood and larvae there was a fair amount. I treated them with BeeVital Hive Clean 13 ml slipped the Varroa floor in and will check tomorrow morning whether I have to repeat the treatment or not but just by looking at them I actually did not see Varroa on them.

Hive Clean at 13 ml was given to all the hives, as was the Varroa floor.

Food was given to hive A and D, in a 2kg of sugar:1,3 ml of water, which gave me  2,6 ml of liquid.  This was divided equally between these two hives. Plus they got 1 dose of 25ml:250 ml of sugar syrup of BeeStrong also from BeeVital. It is a new product, new to me. I believe I have mentioned it before this is the first time I have tried it. I decided to use the small dose not the double one as the colonies I am giving it too are not that strong, and I don’t think that they are stressed either. And if need be I can always give them more another time. I have a good experience with BeeVital mainly with HiveClean which I have used and the results were good. I like the fact that is not full of chemicals and it is easy to treat the bees with. They, the company, are always willing to answer my emails and help with any questions I might have. Living in a clean environment and eco gardening as much as we can I like the idea that I am helping my bees with my treatments and not filling them with chemicals. I try not to have to give them anything. I did not extract from them this year, as I was hoping they would have enough stores to keep them going but I think  before the heat wave they had lots of stores but the Queen has laid eggs and they needed feeding and there was not as much nectar for them to get hence they used up their stores.

I think I am going to have to feed these two hives right up, and I will give a mix of 3:2 to hive E, B, C which have some capped and some uncapped honey plus  pollen. It is still just the end of August so maybe they know better than us what the weather is going to do and they have time to pick up enough stores. Just in case I will give them all some syrup plus BeeStrong just a dose each, to keeps to bugs away. I would hate it if I lost them only because I did not give them any syrup.

Here are some pictures from today, except the last two they are from July’s inspections. The first pic is not at its best I just liked the flying bee. Picture 5 has a Queen from hive B on it. I managed to see a Queen in hive D as well, she was a bit more shy though. 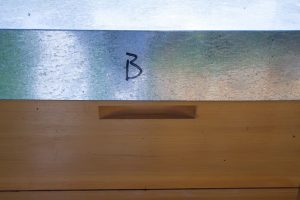 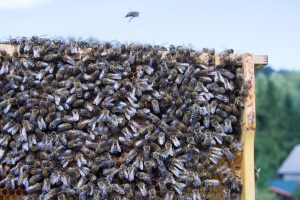 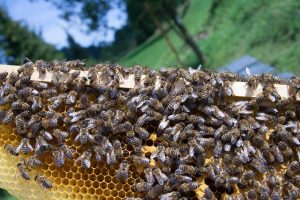 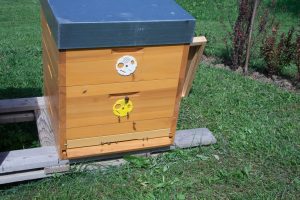 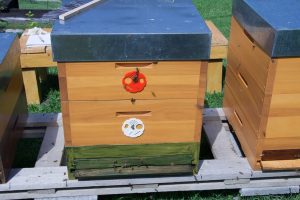 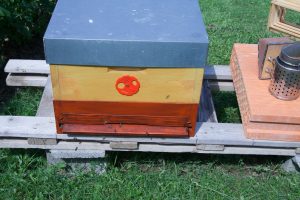 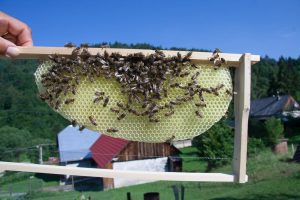 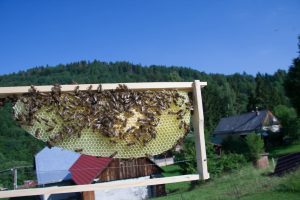