After a horrendous night, high winds/ gusty, pretty mean rainfall we woke up to nearly no wind, semi cloud, clear sky so after all the feeding and robbing and robber screens, water spraying, …. basically keeping an eye on my girls, today I decided was the day to have a closer look at them all.

I stopped feeding on the 6th of September, they were still taking the syrup but as it is warm I expected them to do so anyway the only hive which was a bit slower was hive D but that was always slower to take it so I really just let them get on with it.

Since the 6th I kept the feeders on, I opened them up, actually Mike helped me and got stung near his eye, they were particularly angry that day and we really should have left them. Live and learn.

Hive C looked the best for stores I only took the feeder off, this one had an inverted jar over a “crown board” with a cut out bit in the middle as a feeder, just took it off, had a quick look at them, took a picture and closed it off. 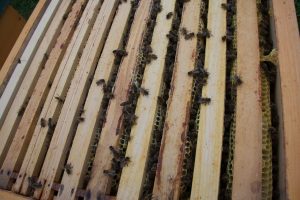 Hives A and D looked surprisingly good, surprisingly because I noticed that especially hive A has been having problems with robber bees, and due to my mistake earlier in the year – killing the Queen they seemed some what slower than the rest but I should give them credit, they both look really good they have 6-7 frames of capped and uncapped honey/syrup in each, and out of 11 that is not bad. They need empty space which the rest of the frames should give them. Picture of hive A.

All the bees in each and every colony were really calm and quiet. They just moved around me and did not get aggressive at any time, it was a pleasure to work with them, especially as they were not that nice during the drought mind you it is not a surprise.

I took pictures of all the entrances, I still have my entrance reducers in, going to keep them there for a bit longer and then put back the normal entrance reducer with mouse guard in them as they are so low and 2 years ago I had a shrew family nesting in one of my hives. I took the robber screens of a day or two after I stopped feeding.  Since then the robbers were in small numbers and our girls are picking up lots of pollen and being busy so I thought I would make their life easier. I do check the floor, I can open the back screen on the floor and I have not found many dead bees on it, so I assume the robbers did not get too far.

In some of the pictures you can see the color of the pollen the bees are coming with I believe that dark orange is from Autumn crocuses they are out in abundance. They seem to be also taken nectar from our Clematis which seems to be liked by other insects plus we still have some Roses in flower, as well as Echinacea, Raspberries are still going strong. 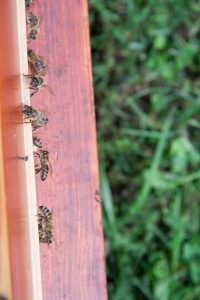 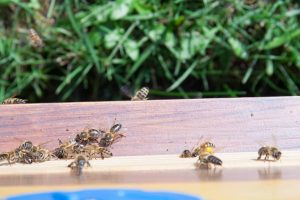 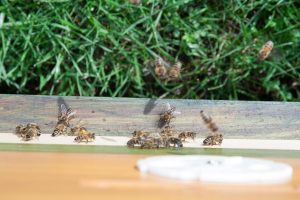 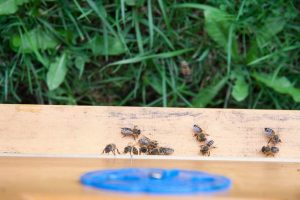 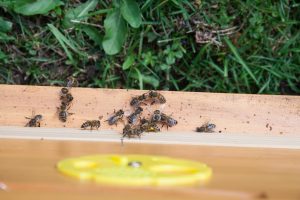 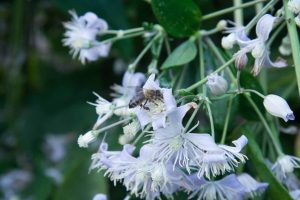 I am not planning to feed any more as I don’t believe they really need it, with the syrup I gave them plus the stores they already had, or did not have, but as there is still nectar and pollen to be had that should fill up the necessary spaces, but I am going to keep a close eye on them and if need be I will give them some more. I did consider giving them another dose of BeeStrong but I don’t think I will now, I will give them a dose each in spring to get them started. I am hoping to get two more feeders from Mr.Kotrla who has so far made or his company has, my Optimal hives, his feeders are brilliant, they are so much better than the jar, I believe some of the robbing problem I had was due to the jar, and it is not as easy with a jar than it is with the feeder, I need to get two as I am planning to get another colony going next year so I have 6 hives in total.

Weather wise, we are a bit struggling due to lack of water, have not had many continues days of rain, I think it is pure luck that we have not run out of our spring water although a few times it came reasonably close. We provide the bees with a bowl of water plus I have been spraying them. But that does not help the flowers.It is relatively warm, but even that has been up and down we have had +38 during the day and +19 during night and then it would jump to +8,  very up and down, all things considered the bees have been real pleause to have again, these are so much less aggressive than my previous lot. They are mean guards when they need to be which is brilliant. I am really happy with them. Till next time, bee happy.