I am starting to think that this is going to be the case every time I feed my bees. Firstly once I started feeding I reduced the entrances, on the small hives I actually put in my entrance reducers with small entrance for 1 or 2 bees, just in case there is interest by other bees,insects. At the beginning it seemed to go unnoticed and then things changed. I firstly gave food to just two hives, the smallest. Then I did an inspection and realized that out of the 6 hives I only had one hive that had some stores in and they were forecasting really bad weather so I gave them about 500g of Apifonda each, after the robbing episode, I gave them a couple of days, closed of the hive that had the most problems, my newly made up hive and added 200g of Apifonda, left them closed for 3 days, on day 3 they were rather loud, it was sunny, they were no bees around this hive. I opened it up, few bees came out, some bees took away dead bees, for the rest of the day they were reasonably calm, the next day I fear there was an intereset by other bees, but this time I just left it, they used up the food I gave them, they still have a capped Queen cell, and they seemed much calmer. I am hoping to open it up either this week or next and have a quick look and take of the feeder, as they are building underneath it and I don’t really want them to so it will be better if it does not stay there very long. I have also given 5 hives Bee Vital Hive Clean a 15ml dose for Varroa as I have noticed a few Varroa mites here and there.

We have had a few weeks with unsettled weather, but who has not?, there are wild flowers in the fields that got cut, plus wild clover, Priganum. In our garden we have Echinacea, Monarda, Origanum wild and yellow, Rudbeckia, Campanula, Hyssop blue and pink, Lavender, .. but I supposed there still is not that much, or even if there is, it has been too wet, or too dry. I don’t know, sometimes I think I am fighting a loosing battle. Or I am trying to hard. ? I don’t know whether this is possible but I don’t want to teach the bees to be “lazy” and bring them food if and when they run out of stores. I need to learn to ignore them. The last time I fed them and closed them I told myself that I am away for 3 days, and even though I went and looked at them I worked hard not to do anything. That is what I will do learn to ignore them from time to time, I like to think I am much better than what I used to be and don’t constatnly open them up or prod them about. I do like to watch and Mike build a nice seating area under a tree so you can see the bees hives with entrance, their comings and goings, I like to sit there and watch. First picture is from Hive F before the robbing last week, the next picture is from the Apiary with the seat. 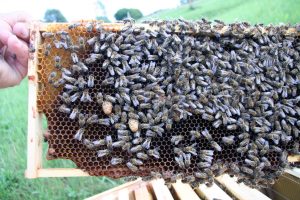 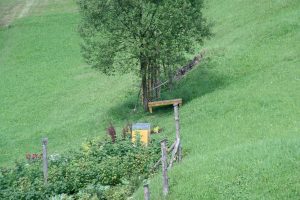