You are here: Home / Beekeeping / Bees

The reason why I have not mentioned that much about my bees is due to the fact that I only have a little amount of them left. I had problems with robbers again so I moved them, and then put a branch from a conifer on top in front of the entrance which worked really well, but then moved them again as they had a normal hive and there was too much empty space so I took 4 frames and put them into the Nuc that Mike made ages ago and put the Nuc on top of the water containers by the shed. I have not looked at them since then but seen the od bee fly in and out with pollen and heard them buzzing. The Queen is there but she really has not been in a rush to lay eggs but they survived the winter so I am reluctant to chuck them out.

I have, fingers crossed, managed to obtain a couple of colonies later on and we wanted to change the “apiary” area as that was the other reason I thought the previous bees suffered, cold winds, heat in the summer so we build them a shelter. Pictures as follows from the beginning to the end – Finished product, inside – the hives will sit on a wooden shelf and I have space behind them to walk and work on them, as and when needed. Have a look, Mike painted it, and of course helped big time, as always. 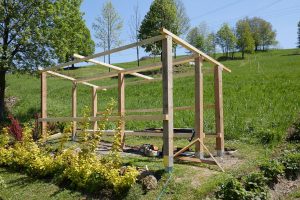 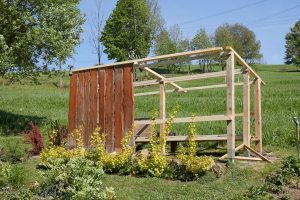 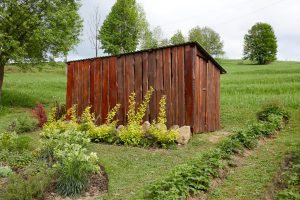 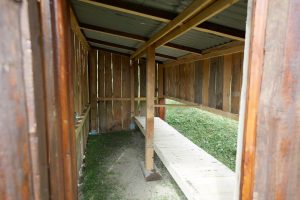 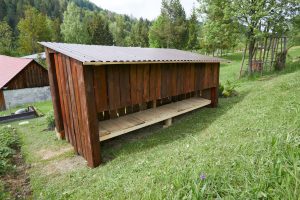 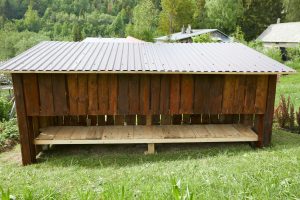 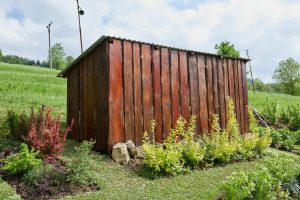 As soon as I have bees in the new Apiary I will let you know, My Nuc wont go into there till they nice and strong again.

When I told other beekeepers that my bees were getting robbed in the spring they did not want to believe me, I have a pretty good idea where the robbers fly from and I believe they do it because it is an easy option, they were robbing at the beginning of May when the Dandeloin flowers were just coming on, once they were out and cherry blossom was out they were not interested. But I am worried that they will do it again. I have read some interesting articles about robbing bees and prevention, the reducion of entrance is a big must, the branch was really effective, some people spray the robbers with diluted detol which confuses the home bees as they don’t recognize their own family and believe them to be robbers, robber screens are good as well I need to improve mine, and opening the hives when there is not many other bees flying around is not a good idea.

We left gaps in between boards for the wind to get through and for ventilation, the wood and two sheets of the roof were all recycled from the old chicken coop or from other projects, we only had to buy two sheets of roofing to finish it off. There is enough room for 6 hives.
We had so many bees in the garden as the Berberis bushes are in full bloom as were the fruit trees, right now we have strawberry plants in bloom as well as alliums the bee bed under the apiary is really good, all the bulbs I put in there last year came up and it looked really good and the bees loved it, even though they were not mine.