You are here: Home / Beekeeping / Between a rock and a hard place

That is how I felt a few weeks ago because of what I ended up with.

It started with a Quenless hive,took me a while to realize this, in the end I ended up with lots of  drones, added 3 frames with eggs from the other two hives.

Then adding Founationless frames was great but it is not just adding these frames there is a system. which I did not know, so I ended up, due to the lack of knowledge with lots of large cell  in my hives.

I actually believe that they managed to raise a Queen from the second frame I gave them. Although I gave them 3 frames with eggs in total with about 9 or more days in between additions, as time and weather permitted, but there was a noticeable change by the time I did it for the 3d time.

But due to the large cell, which I should have taken out or up so they fill it with honey, the Varroa count in my hive went high, When I was adding foundationless frames in my hive I should have continued adding foundationlless  F/L  frames as and when I added more room, also when I found empty large cell frame should have moved it to the outside of the super or up. As over time while you add F/L frames into the hive and put them towards the centre they make them smaller cells till you achieve the optimum size whereas if you leave it, which I did, with the large cells the Varroa mite increases due to the conditions in the hive which for them are perfect. so I found myself with a reasonably high count of Varroa mites, lots of drones, (which is fine), but frames with large cell, on the other side we do have a Queen in that hive now.

don’t put F/L into the bottom super they don’t fill it as quickly with  or if  you do don’t add supers till they filled it.

don’t add too much space too quickly

listen to them and learn from them I knew there was something wrong  with the Quenless hive but it took me too long to do something about it, watch and listen !

I did not do splits, they did not swarm I still have 3 hives with Queens as far as I know

C – this hive  is doing really well, that is the one I would like to split from

2014  the season started with dandelions (not sure of the date) but finished just about the 3d week of July, now I have  echinacea in the garden plus mint and marjoram going into flower, in the fields that were cut for hay in June we have an abundance of wild flowers plus clover, marjoram, thyme so there are bits and bobs .

I have not extracted yet, planning to as soon as the weather permits and my time  works out in conjunctions with it.

Will have some honey from all of the hives, I think I will not treat, not even with the Hive Clean as I think, I believe I will achieve a better result and if I don’t than they are not strong enough to continue with.

Photos from the last time I inspected:

The first two images are from the 6th of June, and empty frame being worked on, plus frame full of drone cells.  the other two are from the 26th of July Frames getting ready for extraction _ so I hope. 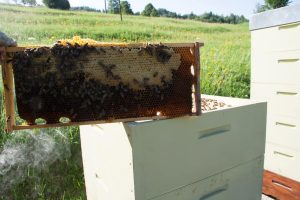 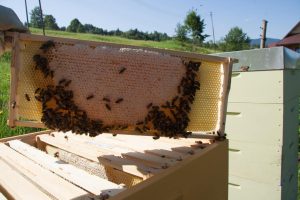 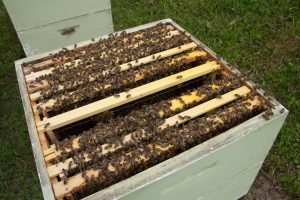 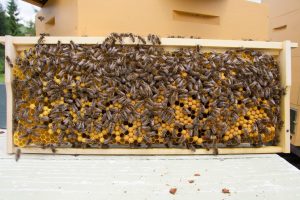