You are here: Home / Projects / The new assistant

We have got ourselves not just a dog but an assistant we need to do some maintenance work in the garden as after this winter soil/ground has moved some of our support walls back and we need to move them back, Mike already adjusted some of our steps that got moved back and soil got washed away or crumbled due to the cold and then just fell away from under it so he dug some of the rocks/steps out and re-built them. He already told me Meddy was helping him as I was out then and did not see it. Later when I got back we went back out and dug a trench which is holding a section of our veg garden and got pushed a bit and Meddy decided she would help. See for yourselves. 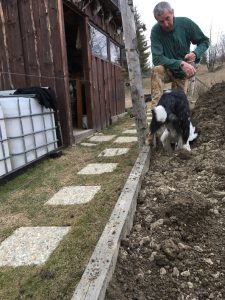 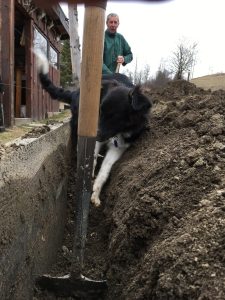 During our morning walk we take Ares, they are getting on really well. So reminds me of Roxy and him. She gets him to play with her every now and again, considering he is 9 years old he really does not do that bad for his age. 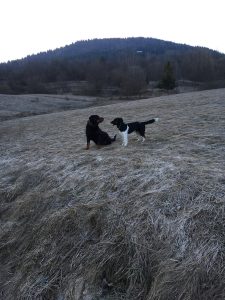 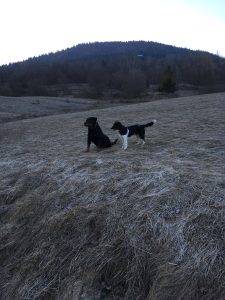 Last is a picture of the sheep resting, towards the end of the day, Ewe-Ewe is under the hay feeder so she can continue munching and the rest is just chilling out, they are doing really well. Doctor Peter came today and castrated the males (Tom and Dick) ,Daisy  and the boys got a shot of minerals, the ewes were de wormed so all is well. We tried to join the ewe’s pens but Willow was so badly behaved that we worried she will hurt or kill one of the lambs so we put the wall back in. Willow is proving to be too stressed even after a year of coaxing and being nice and sociable she does not seem to be able to break away from it.