First time I inspected the hives was on the 5th of April,

The bees were very angry about the whole interruption and I tried to work as effectively as I could while doing my task. I decided to change the order of some of the frames at the S edge as some were not build on and some were actually as empty and as new as when they were placed there at the very beginning plus I have also added new frames Foundationless  F/L ones. For the first time. I have thought about it last  year but never got round to doing it. This time I put my mind to it, after reading the internet and Michael Bush’s book I decided it was worth giving it a go. I spoke to our local specialist in wood work and he had the idea of how to adjust the frames so we can slide a thin strip of wood about 5mm wide. It works brilliantly, we, actually he cut a slot along the top of the frame and then he cut little thin strips of wood about 8mm wide which we then slid into the space, most fit really tightly but just to make sure I put a nail into the middle of it. The bees like a starter strip and need it to continue a straight sheet of wax foundation.

The first hive had 2 F/L frames in the bottom super and 1 F/L frame into the second super and then moved the empty frames into the middle where I could, kept the ones that I took out for later once I add another super. I put them mostly into the middle of the hive but not next to each other.

Second hive had 1 F/L in the bottom super and the second super did not get any new frames just moved the empty frames into the middle, these were in a better mood.

Third hive had 1 F/L in the second super, changed the empty ones for the built up ones in the bottom super. better mood as well. 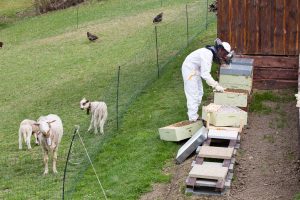 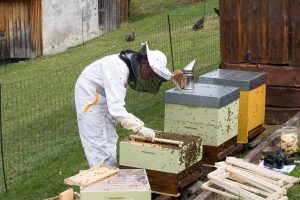 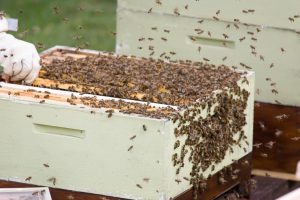 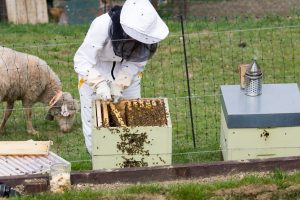 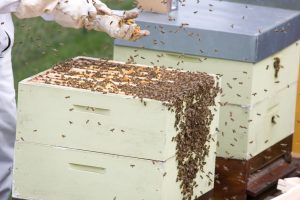 Second inspection took place on the 12th of April – objective to check up on the disorganization from the previous week plus check on the F/L frames.

The first hive – brilliant work on the frames, excellent they sorted them all out and they are all built on and ready. F/L –  the bottom super – they were doing really well on still building it but had most of it done,  I have also added another F/L into the second super  . I have added 1F/L frame into the second super plus another super in which I put some of the frames that I took out that day and the time before. Bees much calmer. 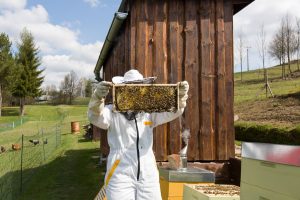 The second hive F/L frames  in bottom super, the bees had sort of had a go at it, but not so much as in the second super so I put it there where they built the entire F/L frame so amazing I have noticed how much bigger the hexagons are. Added 3 F/L frames into the second super also added a super.  They had really nice egg pattern in this hive.

Last, Third hive, as the second hive where ever I added F/L frames in the bottom super they had a go at it, where as in the second super they built it entirely. I added another 2 F/L frames into the second super plus I have also put another super on top. These bees had really nice honey stores some honey already capped, one frame on the S side full with eggs no older then 24 hours – looked very impressi 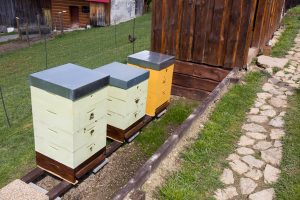 ve. Did not see the Queen in either of them but that is a very good sign.

Since then I have not had an opportunity to check them again, I have only taken off the roof and looked through, they seem to be busy, the last hive looks the busiest from them all. All the bees are coming back with pollen. They are really busy. Temperature is constantly up and down and so is the weather.

Today 5.5.2014 it has gone from 3 in the morning to 22 during day and it is suppose to be 0 or -1 tonight. Fruit trees,  cherries and plums have just about finished, pears, apples are in full bloom, thousands of dandelions about, yellow see which is totally amazing to look at and smells divine.

I have got 3 more hives to fill this year and then that is all my expansion. Would like to build some nucleus hives so I can keep some Queens spare and keep spare bees for when I need them. I am really looking forward to this year.

I have been reading Michael Bush book, I like his way of thinking, its simple and practical and even for  somebody like me is easy to understand. I don’t do everything like he says, I don’t believe you should but for me it has been a really good guide and I think it will be one for a very long time.

Mike has taken some pictures of the bees  today while I was not here, he said the temperature was really high and the bees suddenly congregated by the entrances , as far as I understand it the temperature must  have dropped as did the bees, they were everywhere and not even 5 minutes later there wasn’t a single bee there to be seen.

Amazing. I think this is the most amazing thing having the bees so close that you can watch them all the time, even when you are just walking past just to keep an eye on them. I really enjoy it.

Must upload the picture from that as soon as I have it.

Will keep you posted.